When you live in a place long enough, you start to become immune to its beautiful idiosyncrasies, all those things that set it apart and, like a strong magnet, also draw you to it. As I consider our next step, I’ve been appreciating so much about this little town where we live and all the things that make it so lovely.

–My absolute favorite is that people say hello to each other on the street. It’s a simple thing, but so commonplace it adds a sweetness to every day and every interaction. Not only do they share head nods and a ‘Buenos Dias,’ ‘tardes’ or ‘noches’ (Good morning, afternoon, and evening) but they also share salutations upon entering or exiting a restaurant. ‘Buen Provecho’. I think of it as an acknowledgment that we share these places, and live side by side.

–Families spend a lot of time together. On any given night here in San Miguel, entire families will gather on the plaza. They’ll listen to Mariachis, eat ice cream or bags of popcorn and sweets. Several times I’ve seen adults and wheelchair-borne elders seated on a park bench watching children play. Here, the main plazas and parks are really used by people; these public spaces are gathering points, and being social is part of the culture.

–Another favorite sight is seeing young and old together. It is not uncommon to see younger children helping their grandparents walk down the cobblestone streets, holding their elder gently by the arm or the hand. There is such tenderness in these interactions, I always have to refrain from taking photos because it also seems very intimate.

–This may be specific to San Miguel but people are very courteous, not only in the streets but in their vehicles as well. The town itself has no stoplights or even stop signs, and cars are expected to pause at each intersection and take turns. Unu a uno, one by one. This leads to a slow but easy flow in traffic that is only disrupted when someone – either out of impatience, disrespect or plain selfishness – doesn’t follow the protocol. Then it’s a traffic jam for what feels like hours. It’s fascinating to watch because again, it’s very simple: Take turns and share the road and everything works; cram your huge (usually Mexico City) Suburban into the intersection, and everything comes to a standstill.

–There is very little safety protocol. After living here a while it makes me laugh to hear someone ask, for example, whether to bring car seats for vehicles or whether they can purchase one here. Car seats? Ha! We eat car seats for breakfast.

That said, seat belts are apparently mandatory, and police are giving out fines ($2000 pesos!). Now whether that’s out of concern for safety or as a more palatable way to shake down gringos remains to be seen.

But in amusement parks the safety protocol is questionable at best. At the local waterpark there are rides that make my stomach cramp. Several times I’ve watched as someone has had to crawl up a plastic loop 40 feet in the air to unstick a small child who didn’t have enough body weight to make the loop.

Almost daily I see two to four people on a single motorbike, often with only one (usually adult) wearing a helmet. Bike helmets are also used. Safety? Nah…

I’m not saying this is a good thing, just common, and sometimes quite refreshing after experiencing our overly cautious and highly litigious culture up north.

–Because street food is so commonplace, so is the chance of sitting next to a stranger and striking up a conversation, especially when you’re foreign and locals want to see just what you order and how you’re going to eat it. There’s a sociability built into late night taco stands that could benefit everyone. As we know, sharing food builds community. 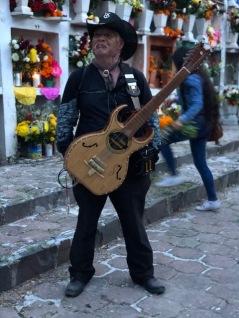 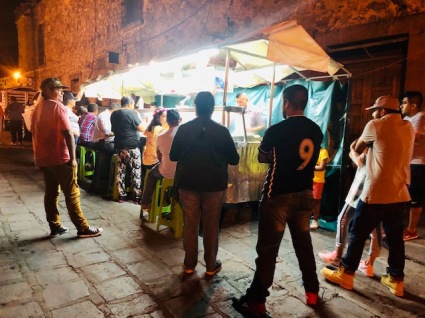 –These folks like to celebrate. There are so many darn parades in a given year in San Miguel you get to the point where you have no idea what they are celebrating. Most often it’s a saint. Then there’s the fireworks. The fireworks drove me crazy when I first arrived, but now when they go off at 4am I tend to just roll over. Another day, another celebration. 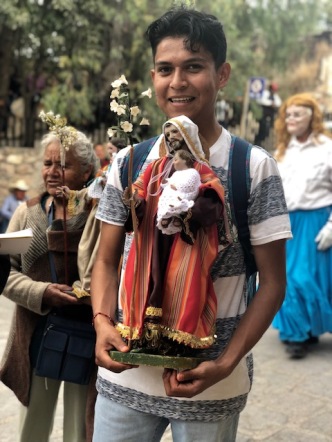 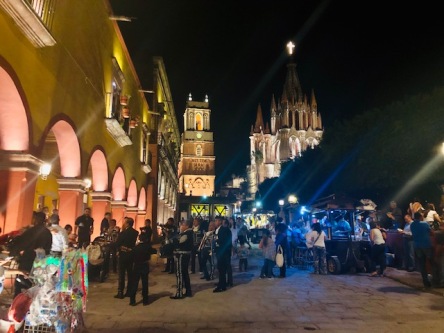 — While poverty clearly is ubiquitous, people here genuinely seem happy. They laugh out loud, tell jokes and sing in public, share food and slap backs. There is a joy in everyday life that I don’t often see in the US, despite our access to riches in so many areas.

–Despite the machismo label, people here feel gentler (not as gentle as Bali, but still kinder than in the US). Their voices are softer, and they don’t often yell for attention or out of entitlement. One caveat might be the very wealthy from Mexico City, who clearly feel San Miguel is provincial and likely filled with a population of servers. But it’s the Americans we can hear a block away, chattering about this or that (often about money and what a great DEAL everything is). We are so very loud as a culture, and I really don’t understand why. If you haven’t done it, take a moment and listen to the volume of your fellow Americans. The only people louder and more disruptive in my experience have been traveling Israelis.

It’s not all sugar and spice, of course. In fact there are a few things that really bother me, and this month has been particularly bad.

For example, I really don’t enjoy having police cars casually driving behind me with their lights flashing. This is not a sign that one is about to pull you over as you might find in the US, but perhaps just to remind you that they’re there? I haven’t figured this one out yet.

Another thing about driving is that after a while, it becomes very easy to drive in extremely narrow streets with just inches between you and another vehicle. That said, those large Mexico City vehicles, matched with apparently little experience driving on small streets, will ding your car, swipe your side mirrors and generally cause damage – and never leave a note or claim responsibility. My car has taken a beating here, but I’m still so grateful to have it.

Then there’s poopoo dust. The month of May seems to be the devil’sin many states, and it feels the same here in San Miguel. Wind whips up dust, plus all the dog poop that never gets collected, and the air becomes a toxic concoction of poopoo dust. There may be many other reasons why the air is so bad here, but in May poopoo dust is a big one.

Surely there are other things that bother you, you might say. But for today I can only think of those two. Because living in a beautiful town where I hear other languages spoken, where I eat fresh fruit and see the sun every day, has been huge blessing.

As I write this there is a band playing loudly at the hotel next door. I can tell that many others are joining in the singing and celebrating. A wedding, maybe? There’s a particularly talented trumpet player among them, and I’m half tempted to wander over and take a look. In fact, I think I will. 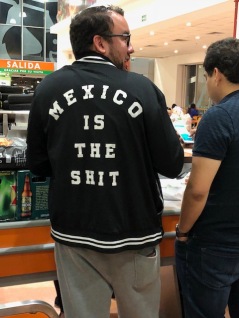