When I was much younger and used to travel even more than I do now, people in faraway lands would look at me with pity and sorrow. They wondered why such a “nice lady” would want to be so far from her family, because maybe she had no family at all. While I always knew I had a home base to return to, the comments did strike me. Why did I travel? Why did I continually want to be far from a place that so many were eager to visit? I know now that I loved to explore because I felt safe coming home. Like childhood studies in secure attachment (children feeling safe enough to leave their parents’ side), I suppose my safe roots allowed me a sense of freedom. But over my life and career I’ve seen so many people forced from the land and home they love because there was no longer safety there. By no fault of their own, they were forced to leave, searching for a better home and a safer place.

describing the route to migrants

showing safe houses along the way 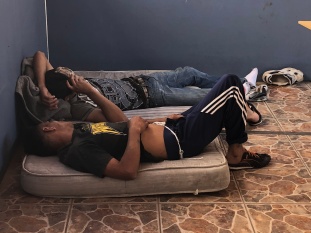 Exhausted from the journey north

This incredible man runs a safe house in Celaya.

Shoes and socks were most needed on the journey

This is Elias’ Dream

Last weekend, I helped distribute items to the thousands of people leaving mostly Honduras on their way to America for a better life, aka The Caravan. The little I had to offer was a drop in the bucket in the face of such immense need. Yet all were grateful. They stood in line, said thank you and please. I tried to tell people that the political landscape in America was not at all friendly these days, and that applying for asylum in Mexico, even temporarily, might garner them a better life. But most would not be moved. They were so single minded in their quest for the northern border, believing that God would prevail. One man even said to me “Trump is just a man; Moses parted the seas.” Yet I still felt it was my duty to tell them what I knew, and to direct them to volunteer immigration attorneys — fierce and tireless Guerreras all — helping to inform and educate people on what they are up against on the US border and what reasonable chances they might have at legal entry.

Their greatest challenge, as I see it, is in public perception. From the beginning, false news reports painted them with a wide brush as illegal, criminal, Middle Eastern???, and even terrorists. These fear-mongering monikers are useless and dangerous, a kind of victim-blaming that makes it easier for the world in general and the US in particular to avert its gaze from their reality. So many of us are guilty.

Yet the situations these, and most, asylum seekers are fleeing from are not of their own making. The crisis that the caravan is fleeing is certainly due to US meddling in most all Latin American politics, in America’s bottomless thirst for drugs demanded from these countries, and by corrupt governments that in many cases the US has installed. But a critical factor is climate change, that has and will forever alter the landscape, literally and politically, of our world.

During my graduate studies in conflict management I looked at the impact of climate on conflict, and the relationship was direct. Not so much in people drowning in the rising seas or burning in forest fires (as we’ve seen on the news as recently as last night), but more the migration of masses in search of more arable land, reasonable climate, and accessible food and water. These moving populations impact each new land they touch. They strain available resources, impacting limited land availability when they arrive, and provoking stress and tension in populations already struggling for limited available resources. Crops fail due to land grabs, to decreasing (or nonexistent) rainfall, which decreases food production. When jobs and food disappears people are forced to move elsewhere, and the cycle continues.

The desperation I saw last weekend isn’t going anywhere. It will only increase as climate changes intensify and more people are forced to move. There is enough for everyone, let’s be clear on that. But it does entail protecting and then sharing the resources we have. I do believe that if our awareness and agency around climate change can grow, there are chances to offset such migrations at the root. But if we look at these movements in isolation, and label them as “invasions” of “bad” people coming to take what we have, then nothing will change. These migrations will only continue, and blaming language and labels will do nothing to stem the flow or ease any conflict. It may instead increase the likelihood that what we fear will become real: that tensions will grow in various forms, possibly into outright violence. It is essential to see climate change as a verifiable, in fact legal, cause of migration and asylum seeking.

According to the World Bank, increases in warming climate will force another 3.9 million migrants to flee Central America in the next 30 years. This, from one of the rare articles I’ve seen pointing a finger at climate change as culprit:

“This mass movement of people risks destabilising their home countries and presents a challenge for destinations such as the US. The 1951 UN refugee convention sets out clear criteria for the granting of asylum, such as persecution and war, but climate change is not on the list.

With an estimated 150 million to 300 million climate refugees set to be displaced worldwide by 2050, a new international framework will be needed to accommodate them.” (Read the whole article here: https://www.theguardian.com/world/2018/oct/30/migrant-caravan-causes-climate-change-central-america 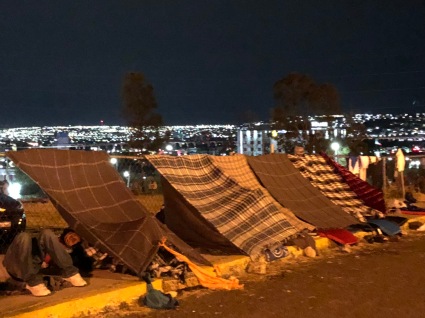 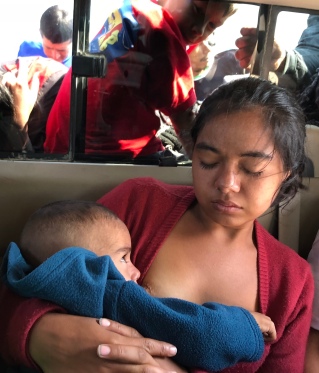 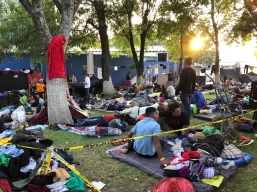 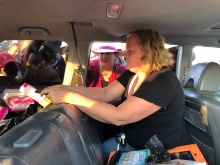 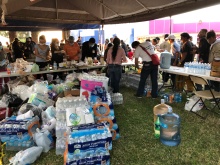 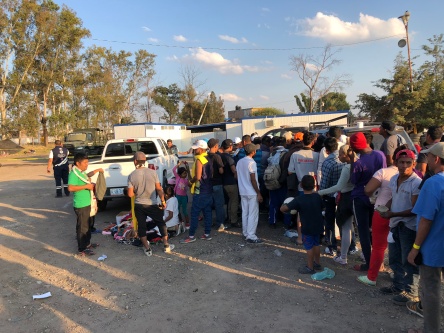 Meanwhile, racism and xenophobia will not address the problem. In response to narrow-minded Facebook posts regarding the Caravan, I felt moved to remind people that there is nothing illegal about these people or what they are asking for. They are human beings who are desperately seeking a better life – like any asylum seeker who has ever landed on US shores, Ever. They are fleeing violence, lack of food and jobs. They want to provide for themselves and their children. Like any decent human being would. They are so desperate for a better life that they pack their children, their parents and grandparents, in some cases their pets and their few belongings: some clothes, a photo, a stroller and blankets… Then they decide to WALK to America to ask – with full legal right — for asylum!! They are walking in torn and battered shoes, in %$@&! flip flops, and they are ASKING for help. There will surely be criminals in the mix of thousands. There will surely be exploitation and desperate moves for food or warmth. But what gets me so much in statements from armchair critics mainly in America is the assumption that these people WANT to be illegal, that they are choosing this. NO, they are ASKING for entry. They are asking for help.

What also is certain is that so many people who are making negative comments about this caravan have never known what it is to be hungry, or freezing, to have your children die in front of your eyes (like one woman who I met), or for them to cry for food that you are unable to provide for lack of a job or other resources – despite working endless hours in the hope of providing. This is a state most Americans do not know. We are so very blessed. So instead of passing judgment, please take a moment and try to walk in these peoples’ shoes. Try to imagine what would make — no, compel — someone to cross two or three countries on foot in the hope of providing for yourself and your family. I don’t know what will happen or how many will be allowed into our country (and if too few then perhaps yes, inspiring others to try to enter illegally). But I do know that what they are asking for is reasonable and just. As we close in on Thanksgiving, I ask that you try to imagine what it would be like without the comforts you have – and I assure you, regardless of your economic standing you have it better than most of the folks I just spent the weekend helping! – and be grateful. Don’t pass judgment on others, but truly feel gratitude for what you have. Because the seeds of that fate likely came to you by chance and by luck. By the color of your skin and the location of your birth.

Two thousand more people arrived in Mexico City this week, and another group will be heading up from El Salvador soon. Like any person, I can only do so much, but the important thing is that I do something. Each day I do something to be kind and generous, to educate and to help those in need.  These specific travelers may not get what they want but I can help make their day a bit better. And in the long run I can work toward awareness of climate change every chance I get. I will do my part so that they — and all of us — can continue to live safely in whatever place we want to call home. Will you do yours? 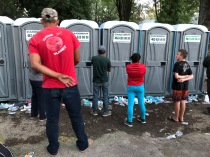 2 thoughts on “Don’t like the Caravan? Do something about Climate Change!”