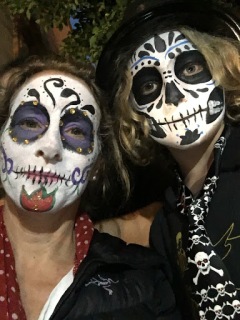 This week, in celebration of the Day of the Dead, thousands of people gathered in the central plaza here in Mexico, a great number in costume. There was laughter and singing, and the decorating and then visiting of dozens of elaborate shrines to the dead set up around the plaza. I was trying to think of any similar event in the US and I simply could not. For each holiday I could think of, it morphed into a different consumerist event. Sure, we have some nods to family and to giving, but as a general cultural expression, all of our holidays – every single one that I could think of – are about buying stuff. Except maybe Thanksgiving, which is entirely focused on overeating and then feeling guilty about it. Am I overlooking something? Can we even imagine an entire culture, young and old together, simply and completely honoring its dead – and having a great time doing it?
I was reminded that I won’t be in the US this holiday season and I’m thrilled (almost as thrilled as I am to be gone for this election!). Even one Christmas tune can put me on edge; one commercial telling me that if I just loved my family more I’d buy them a bunch more crap, and I lose it. And the thing is, we are so bombarded by these messages each year, we have no idea that it can be different. Depression always increases this time of year, stress skyrockets, and we all think we’re doing our part to fully participate in the American Dream. But it’s a dream created by markets that desperately need consumers, and 9 times out of ten – if not ten times out of ten – this consumerism does not bring any lasting happiness.
How clearly I remember that moment after tearing open the umpteenth gift only to crash in sadness when I realized it was the last one. Or not remembering a single gift except maybe that one special request. And now as a parent, sometimes realizing that the one desired gift might be unattainable, followed by a tinge of disappointment (ok, maybe I’m projecting my child’s presumed or obvious disappointment). Am I the only one who felt that the best I could do for my child, friend, or family member during the holidays, was not good enough? I’ve felt that more than I’d like. Those people aren’t your friends, you might say, but feelings of self-doubt aren’t logical. Because the TV, the radio, the papers and certainly the onslaught of internet sale emails, all tell you that you have to buy more, better and more often, to be a better person yourself.
I’ve tried to do my part to resist the barrage, to reduce the number of presents I give, to avoid department stores of all stripes during these months, and sometimes just to get out of town. I’ve tried to be creative in my giving – but not so creative as to be the kind of mother my son goes to therapy about years later claiming all his friends got amazing shwag while he got handicrafts. Whether our haul is small or large, I make sure we practice speaking out loud all the things for which we are grateful.  And if my child still complains that his present trove was skinny, I remind him of all the kids in the world, and so many in our state of New Mexico, who go to bed hungry every night. It’s manipulative, and it’s also true.
So this year I challenge people to celebrate differently. We have a massive cultural shift upon us, regardless of who becomes our next President. And I see our holiday culture and our current cultural shift as being intricately linked. It’s a consumerist, self-loathing, and divisive pressure. Think about it. Remind yourselves that stuff is not the IT of holiday celebration (and neither is overeating, by the way), and being unkind is not the IT of being American. Governments rise and fall, they fail and succeed and destroy, and while good folks work like mad to make the world a better place, it’s an uphill battle every day. Work hard but don’t be attached to the outcome, even if the results are infuriating. As the Dalai Lama once famously said, being angry is like drinking poison and expecting the other person to die.
This holiday season, do yourselves a favor and don’t eat the media’s toxic stew. Instead, turn off your computer and your phone and spend time with someone you love. Maybe that person is your kid, your dog, your partner, or yourself. If you don’t have a dog, get one. Go camping, drink a latte, full fat. Hug your kids, or a neighbor, or a stranger. Rent a funny movie or get your faces painted. Make a real plan to take that trip you’ve always wanted, cause you ain’t getting any younger. Take a break from all the messages that you may or may not believe and then go back refreshed. Because the fight will still be going on. Whether it’s against oppressive governments (by then possibly our own) or another damn Christmas jingle reminding us to buy more, it will be there. Try to make it different. This year, like the Day of the Dead celebrations, make your holidays about all the people you love and not the stuff they – or you – want. 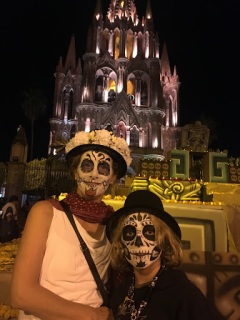